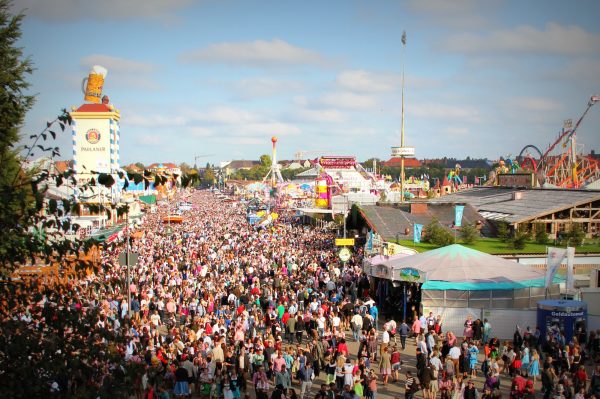 Even though most of us think Oktoberfest is just a chance to dress up in traditional costumes, drink beer, eat German food and let loose – the long-held German tradition is actually steeped in a rich history.

The History Of Oktoberfest

Did you know that Oktoberfest’s origin actually stems from a Royal marriage?

On the 12th of October 1810, Crown Prince Ludwig married Princess Therese of Saxony-Hidburghausen. Festivities were held on the fields in front of the city’s gates and everyone in Munich was invited to help celebrate. To mark the close of the event, a horse race was held in the presence of the Royal family, and it was the decision to repeat this popular horse race the following year, that led to the beginning of Oktoberfest.

In 1811, an Agricultural Show, designed to boost Bavarian agriculture, was added to the festivities; however, other amusements were sparse over the first few decades. In 1818, the first carousel and two swings were set-up and visitors were able to quench their thirst at small beer stands, which grew rapidly in number over the years. Eventually, in 1896, the first beer tents and halls that were funded by major breweries and set-up by enterprising landlords replaced the original beer stands.

In the century that followed, the fairground trade continued to grow until the amount of entertainment, food and drinking options became immense and the Oktoberfest festival became the event that we all know and love today.

This year, Munich will be hosting its 184th annual Oktoberfest, which is now the largest festival in the world attracting more than six million visitors each year.

The event is still held in the same location on the Theresienwiese, which the locals refer to as ‘Wies’n’.

This year, Munich’s Oktoberfest celebrations will take up a total of 34.5 hectares, with 545 businesses taking part, including 143 from the gastronomical sector, 151 carnies and 251 vendors.

While Oktoberfest is largely considered an adult event, families are invited to enjoy the celebrations on Official Family Days, which will be held every Tuesday throughout the 2017 event.

Where To Celebrate In Australia

Itching to celebrate Oktoberfest this year but can’t quite make it all the way to Germany? Don’t stress, there’s plenty of traditional Bavarian celebrations taking place right here, in Australia.

Royal Melbourne Oktoberfest
On the 23rd of September 2017, the Royal Exhibition Building in Melbourne will be transformed into one giant beer festival, with German oompah bands, folk dancing, on-stage competitions and an atmosphere that’s guaranteed to be electric!

All six of Munich’s Oktoberfest Breweries will be featured at the event with more than 50 types of imported German beer, cider, wine, schnapps and popular spirit mixers all available. Tickets can be purchased on Eventbrite.

Oktoberfest Brisbane 2017
Held at the Brisbane Showgrounds over two weekends, October 6-8 and 13-15, world-famous beers, traditional German cuisine and non-stop entertainment make this an event not to be missed! Purchase your tickets, here!

There are also a number of events held at pubs and restaurants across the country!

To celebrate Oktoberfest with as much enthusiasm as the Germans, contact Tudor House about getting custom flags, banners or bunting made today!