No one truly knows exactly when the first flag was flown in an actual sporting event. Flags have a long history, and in the early years, they were used as field signs or standards, which were used in warfare, representing, for example, The Roman Empire or other nations. 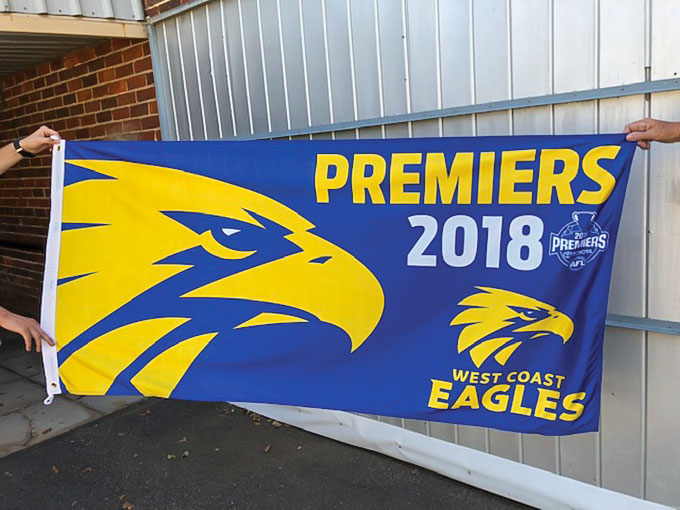 Flags have represented countries on the battlefield, on ships that sailed the sea and in permanent positions at monuments and cemeteries, where the symbolically recognised the lives of those lost in battle.

Banners of all types are often created or adapted to suit the needs of a particular occasion and may be fairly simple, especially if their main purpose is to display a single current demand or slogan. They may be small, cheap and mass-produced in order to be carried by a large number of people.

Others, such as trade union banners, on the other hand, are often unique, large and elaborate creations celebrating a union’s history and the skills of its members. Their production requires significant skilled work, using valuable materials such as silk, and they are often designed to be carried by more than one person. So too are sporting banners.

Flags and banners have been used for decades in sports to show and indicate support for a particular team or player, or simply to catch the eye of broadcasting cameras with quipped lines and funny phrases. They can also be used to display pictures or flag colours to indicate support.

Banners are a very significant aspect of soccer-and one thing soccer fans are famous for is their ingenious ways to support their beloved teams, making the soccer stadium the perfect vantage point to see some of the best banner and flag work in the world, not to mention some seriously cutting and risqué humour that your eyes will ever see.

There are many features in all these examples that illustrate the ways in which people assert their sense of belonging to a particular community. Visually, colour often makes the most immediate impact and we have seen many pictures dominated by the colour red, in a display of affinity for a particular game, sport or team. Clothing, the banners’ backgrounds, lettering, all contribute to this effect.

The words used in banners, and to some extent the imagery too; rely on a considerable amount of audience knowledge. This may be of popular culture including films and music, of soccer players and, or of religious language and iconography.

The next time you see a banner, proudly raised and flowing in the wind, think about all the aspects it is made up of – materials, colours, images, words, and yes, even expressions of belief, political and social ideology.

And, in honour of the perennial ingenuity and self-effacing humour of cheeky sports fans everywhere, we raise a glass!

Do you have a game or event coming up? Support your team the right way with a flag or banner from Tudor House.

Contact us today to see how we can help or to check what options we have available.